Like many home buyers, when moving a few years ago, we found ourselves choosing between a newer house out in the boonies or an older home in a more established neighborhood. We chose the older home (well, relatively speaking – it was built in 1990!) and ever since moving in, we’ve been slowly making updates.

One room that we hadn’t touched was the master bedroom. We prioritized the common areas – obviously! Because that’s what people see! And when we had the time and money to work on stuff upstairs, the playroom and our daughter’s bedroom and bathroom were our focus.

Meanwhile, the master bedroom became a dumping ground for stuff we had no place else for. The $3 temporary blinds we bought from IKEA were barely hanging on after two years. Empty space in the room that I didn’t know what to do with became the perfect place for racks of drying clothes. (Who thought it was a good idea to make kids clothes that can’t go in the dryer?!) And, during winter, the master bedroom became my preferred place to work because it was warmer than any other room in the house, so my nightstand was piled with work stuff.

After working with a sleep coach this year, I started to think of our bedroom differently. I realized that it was hard for me to relax in an environment that felt so cluttered, half-done, and chaotic. And the bedroom also became a bit of a metaphor for the rest of my life–prioritizing everything and everyone over myself.

It was time to design a more sleep-friendly bedroom. Here’s how I did it.

The bedroom in our previous house was sunny and bright, with huge windows and light walls. Yellow bedding looked great in there. In this house, I wanted to have a darker bedroom, so we painted the walls with Benjamin Moore’s Black Pepper. The bright yellow bedding looked hideous with the navy-hued walls. But again: upgrading the bedding wasn’t a priority.

I switched out the old bedding with a light gray Parachute quilt and white sheets, with some inexpensive accent pillows from Target. It makes such a difference and sets the tone for relaxation–instead of that jarring yellow, the cool tones of the bedding make the room feel like a calming oasis. And the Parachute quilt is just the best thing ever. If you hate messing with duvet covers, get yourself a quilt. I love that this one is breathable, so even when you’re bundled up, you don’t feel sweaty or suffocated.

This was a suggestion from the sleep coach. Those cheap temporary blinds, meant to be a stopgap until we figured out what we wanted for window treatments, filtered light, but didn’t block it.

I’ve never been a huge fan of heavy, light-blocking curtains because they make me think of hotel rooms and stuffy, formal interior design. But I found a light gray set at IKEA that worked for blocking out the light without looking too heavy. 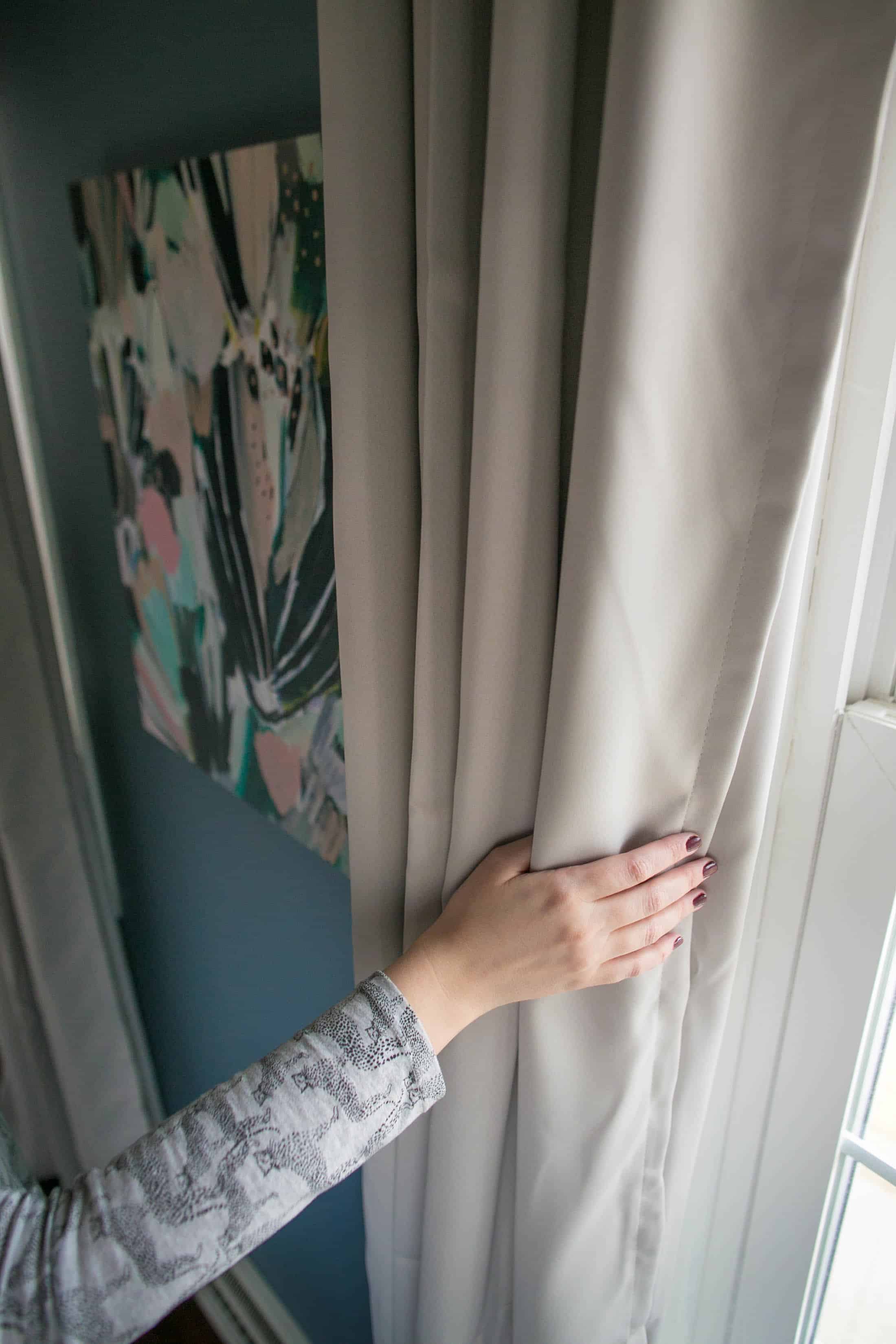 You would not believe what a difference the blackout curtains have made. I thought our bedroom was dark at night before, but I was wrong–even just ambient light from the moon and street were filtering into the room. The blackout curtains were so worth it.

Our bedroom would often feel stuffy, especially in the winter. I started making a point to open the window for at least an hour a day–as long as the temperature was at least in the 30s–to get some fresh air in. (Yes, I know, I probably ran up the heating bill in the process.) I always believed that being super warm and toasty was conducive to good sleep, but my sleep coach said the opposite is true–we actually sleep better when we’re cooler, so making sure the bedroom doesn’t feel like a sauna really helps.

I also added some plants that are known to help purify the air. Bringing the outdoors in also helps make the room feel more grounding. 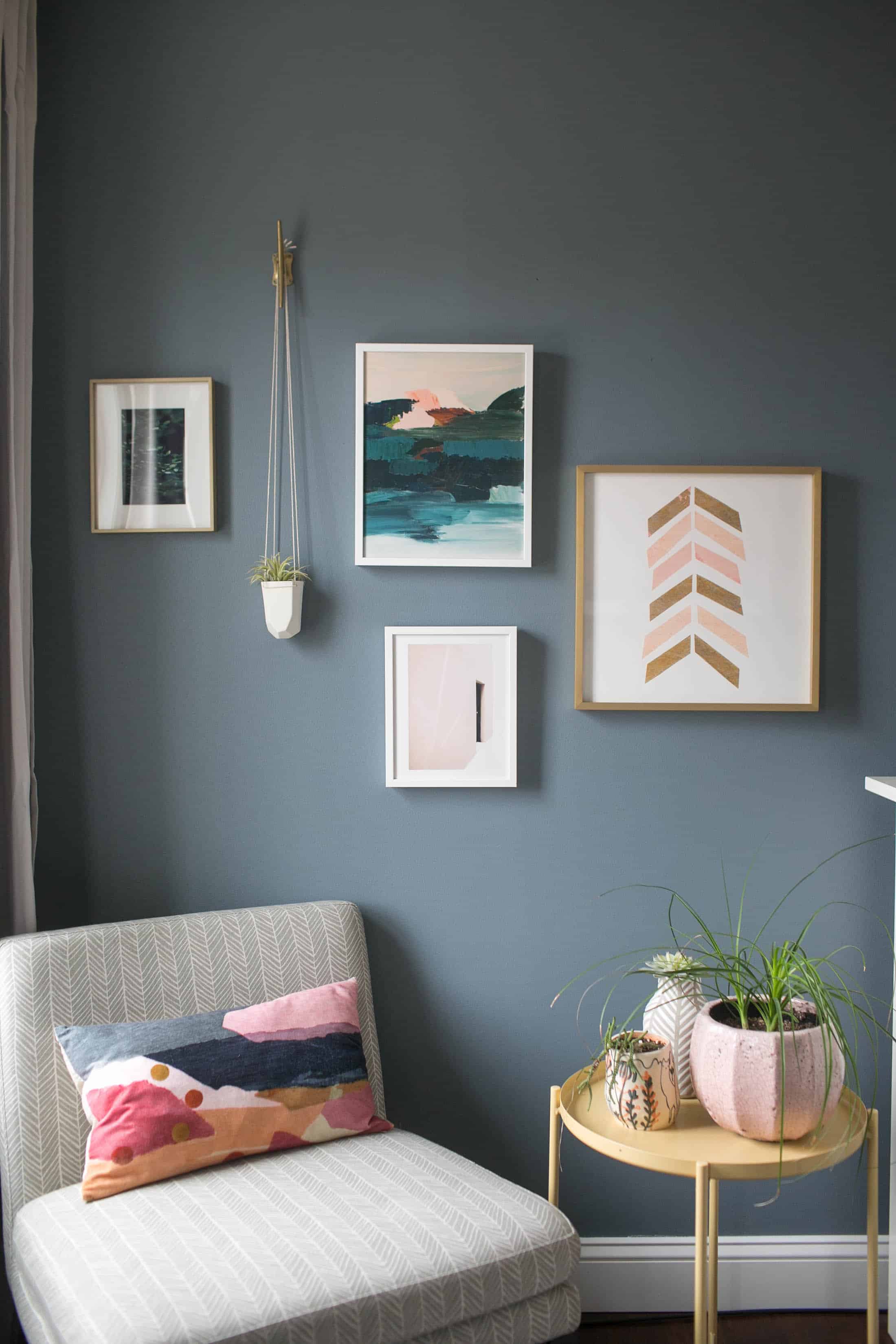 This was a huge problem for me–I always worked in bed at night. Creating an association between work and the place where you’re supposed to let go of your worries and rest every night? So, so bad!

That said, I do have work that I need to wrap up every night and my office doesn’t have a ceiling light (!), so working in there at night just isn’t an option and I don’t like sitting with my laptop at a table. So I created a little nook with a chair where I can work so I’m not working in bed. And all of the books and papers I need for work? They go back to the office where they live before I go to sleep.

My first little bit of zen was buying a beautiful handmade weighted blanket. I didn’t like any of the ones I found online, so I sought out an Etsy seller that makes custom weighted blankets with your choice of fabric. 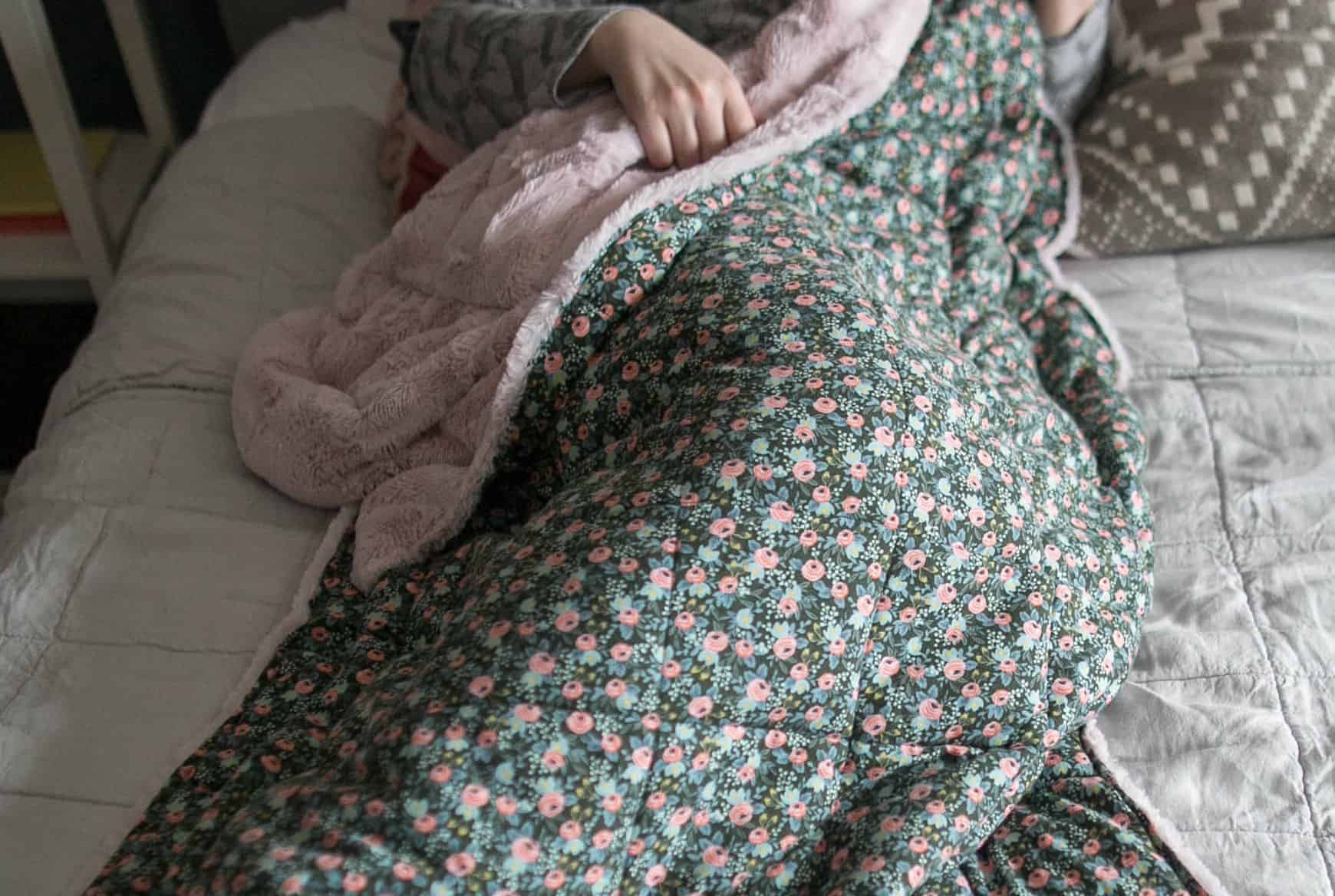 Weighted blankets are supposed to help you sleep better and feel less anxious–in all honesty, I haven’t really experienced any difference in my anxiety, but it does feel good to have a big heavy blanket on. It’s hard on my joints to actually sleep with the blanket all night, so I usually like to cuddle up with it while reading a good book and sipping a lavender latte.

And speaking of lavender: aromatherapy! This is another calming element I added to the bedroom. I read that it’s best not to diffuse the same oil or blend day after day, so I switch things up nightly with some of Stephanie’s sleep blends and a few favorites from Edens Garden–Be Still, Sleep Ease, and Tranquility.

I also decorated–the first time we have ever had a master bedroom that I took the time to decorate. (How sad is that!?) I replaced the cheap, decades-old lamp we had with one that fits my aesthetic better, bought a little table from IKEA for next to the chair, and hung some gorgeous art from Minted on the walls. 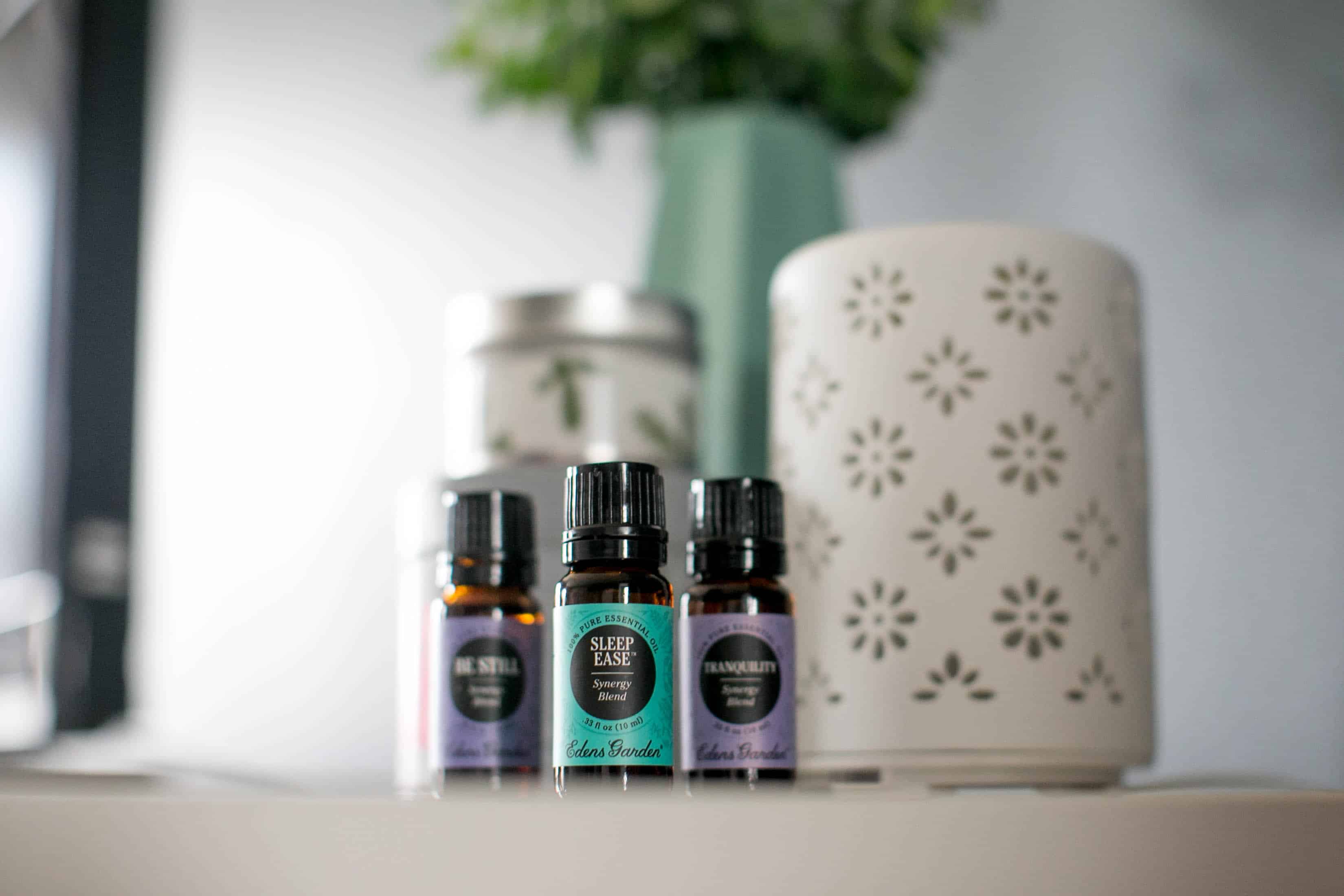 After so many years focusing on every other room in the house, it’s nice to finally have a bedroom that actually makes me feel good when I walk in the door.

Disclosure: Some of these products were sent to Hello Glow to review, others are things we’ve bought ourselves, but everything here is something we totally love. Photos by Sharon Vanorny. 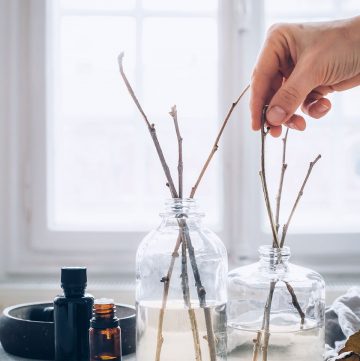 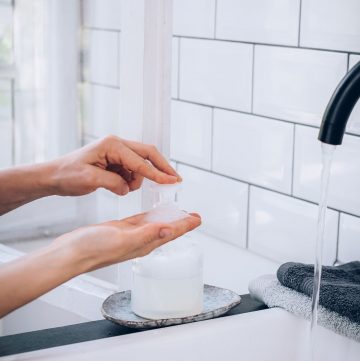